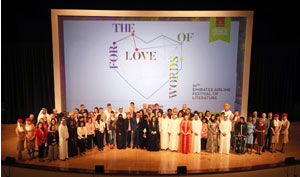 Dubai, 1 March 2018: The Emirates Airline Festival of Literature began its 10th anniversary celebrations today with a spectacular opening event at The Cultural & Scientific Association, Al Mamzar. The ceremony featured multi-cultural performers honouring the history of the Festival and its home, Dubai, with recitals by Festival 2018 authors, shadow-dancers, pearl diver aerialists and traditional Emirati sea-faring singers, bringing to life the many facets of the Festival’s programme. The event also marked the official launch of the Festival’s commemorative 10th anniversary book, For the Love of Words.

Ayala Dancers from Hamdan Bin Mohammed Heritage Center greeted guests as they entered the theatre. Following the addresses, the audience was invited on a journey to celebrate the heritage and beauty of the UAE’s lands, with voice, shadow and silhouette bringing the words of Sheikh Zayed bin Sultan Al Nahyan, UAE’s Founding Father, to life. The vibrant performance, entitled ‘For the Love of Words’, directed and produced by Shelley Frost, was created for the Festival’s 10th anniversary celebration as well as to commemorate the centenary of Sheikh Zayed’s birth.

His Highness Sheikh Ahmed Bin Saeed Al Maktoum, Chairman of the Emirates Literature Foundation, the governing body of the Festival, said: ‘’Today, as we open the 10th edition of the annual Emirates Airline Festival of Literature, it is with great joy that we look back at the immense work done by Isobel and the team to foster a culture of reading in the country. In ten short years, the Festival has grown from strength to strength, becoming a world-class event from humble beginnings. Today’s celebration not only begins proceedings for 10 days of literary enjoyment but also celebrates the UAE and the country’s founding father, Sheikh Zayed bin Sultan Al Nahyan, who recognized the importance of literature and the written word in building our community. I cannot think of a better way to pay homage to Sheikh Zayed than by continuing the excellent work of the Festival.’

More than 180 authors from around the world will be participating at the Festival this year, representing almost 50 nations worldwide. Isobel Abulhoul, OBE, CEO and Trustee of the Emirates Literature Foundation and Director of the Emirates Airline Festival of Literature said, ‘2018 is the celebration of ten wonderful, adventure packed years for the Festival. We can take a moment to remember with gratitude all the wonderful inspirational authors who have attended over the years that has made this annual event so special. Some of our most beloved authors from past years are returning to help us mark this milestone anniversary, in addition to a spectacular line-up of global literary stars making their first visit to the Festival.

‘The line-up for 2018 is nothing short of spectacular. All ages, all tastes, book lovers and those who have yet to discover the joy of reading, are in for an amazing, entertaining, and happening event over the next ten days.’

Every year, the Emirates Literature Foundation Board of Trustees recognises the major contribution of an individual towards fostering literacy, education and a love of literature in all its forms. This year, His Excellency Zaki Anwar Nusseibeh, Minister of State of the UAE Government, was presented with the Emirates Airline Festival of Literature 2018 Festival Personality Award at the Opening Ceremony.

Born in Jerusalem, HE Nusseibeh settled in Abu Dhabi and began his career in journalism, before joining the UAE Ministry of Information and Tourism where he edited the first English newspaper to be published by the Abu Dhabi Government and participated in establishing its first Arabic newspaper. In 1975, he became the Director of the Press Office for His Highness Sheikh Zayed bin Sultan Al Nahyan, President of the UAE, and subsequently Advisor while continuing his role as the President’s personal interpreter. He was actively involved during that period in the preparation of official State visits and in the formulation of Government briefs.

During his career, he has served on several public and private bodies dealing with the development of cultural and educational strategies in Abu Dhabi. Additionally, he served as a Trustee of the Sheikh Zayed Award and the International Prize for Arab Fiction. His achievements and cross-cultural work have seen him decorated in countries around the world; he has been awarded the Officer of the Jordanian Order of Independence (1969), the Commander of the French Order of Arts et Lettres (2008) and the Commander of the Order of British Empire CBE (2013).

HE Nusseibeh’s literary legacy lies in his published translations of Gulf and Arab poetry into many European languages and his contributions of articles to journals and newspapers. His writing has received a number of prestigious Arab and International Awards, including the Abu Dhabi Award (2007), the Owais Cultural Award UAE (2013), the Cultural Foundation Pro-Europe European Arab Culture Prize in Leipzig (2013), the Golden Medal of Arts from the Kennedy Centre Washington (2014) and the Cultural Diplomat of the Year 2017 at the Abu Dhabi Cultural Summit.

In 2014, HE Nusseibeh received an honorary PhD in Human Sciences by the University of Jerusalem in recognition of his long and active career.

Abulhoul concluded: ‘None of this would be possible without the continued patronage of His Highness Sheikh Mohammad bin Rashid Al Maktoum, Vice-President and Prime Minister of the UAE and Ruler of Dubai. We would also like to extend our deepest thanks to the Emirates Literature Foundation Chairman His Highness Sheikh Ahmed Bin Saeed Al Maktoum, our Vice Chair Her Highness Sheikha Latifa bint Mohammed Bin Rashid Al Maktoum and the distinguished Trustees of the Foundation, our partners Emirates Airline and Dubai Culture & Arts Authority (Dubai Culture) and the many sponsors and supporters for all their guidance and support over the past year.’