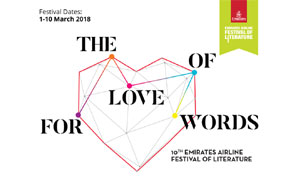 Dubai, 23 October 2017: The UAE’s annual celebration of the written and spoken word, the Emirates Airline Festival of Literature, has announced its strongest ever line-up for its 10th anniversary event, which takes place from 1-10 March 2018.

To mark this milestone occasion, an exclusive list of 25 unmissable sessions will be released from today at a special Early Bird discount offer of 15%. 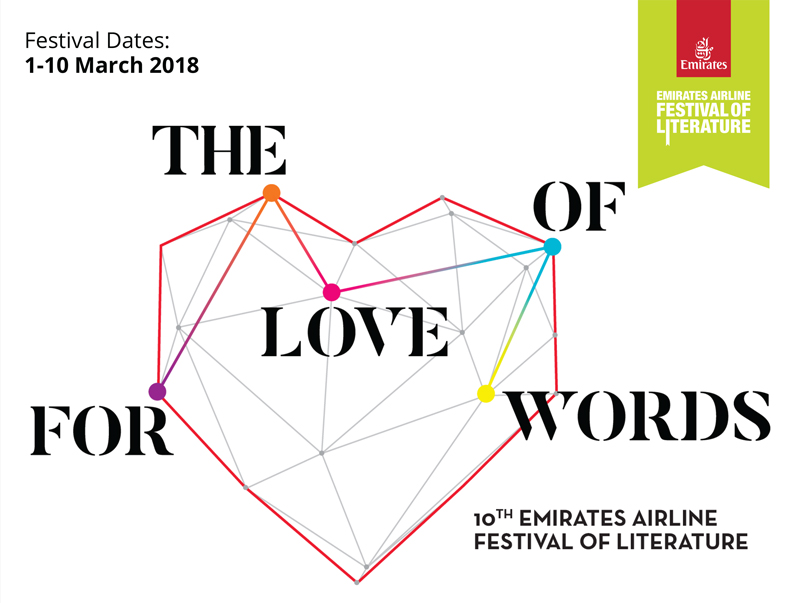 This year’s landmark event features some of the biggest names in the poetry world, taking the stage for a truly unique performance. ‘For the Love of Words’ celebrates the power of poetry across cultures, within the magnificent setting of Dubai Opera. This exceptional evening presents a once in a lifetime gathering of the best UK and UAE contemporary poets including Khalid AlBudoor, Nujoom Nasser AlGhanem, spoken word artist Afra Atiq, UK Poet Laureate Carol Ann Duffy, Simon Armitage, John Agard, Imtiaz Dharker, Roger McGough, Grace Nichols, Lemn Sissay and World Poetry Slam Champion Harry Baker. This extraordinary night of poetry has been made possible thanks to a collaboration between the Festival, Dubai Opera and The British Council, with the support of the UK GREAT campaign.

Other highlight events include the chance to join food legends Madhur Jaffrey and Ken Hom at their exclusive Festival dining experiences, and an invitation to come along to the Festival’s Richard and Judy Book Club. Hosted by Britain’s beloved broadcasters and book champions, Richard Madeley and Judy Finnigan, the couple will introduce their pick of Festival authors and discuss the novels guaranteed to get book lovers buzzing.

Saroo Brierley, whose story inspired the Oscar-nominated film Lion, starring Dev Patel and Nicole Kidman, will talk about his life and introduce a special screening of the film, in partnership with Dubai International Film Festival. The programme also features columnist and author Cheryl Strayed, whose book Wild was adapted to the Oscar-nominated film starring Reese Witherspoon; bestselling author of the soon-to-be-released film Crazy Rich Asians, Kevin Kwan; and James Dashner, author of The Maze Runner series, on which the hit films are based.

In addition, there is a rare chance to see Andy Weir, via live video link from the United States. His debut novel, The Martian, was a runaway hit in 2014 and later adapted to a blockbuster film by Ridley Scott, starring Matt Damon and Jessica Chastain.

Palestinian author Ibrahim Nasrallah, nominated for an IPAF for Time of White Horses; Syrian author of No Knives in the Kitchens of This City, Khaled Khalifa, shortlisted twice for an IPAF; and acclaimed Indian author Chetan Bhagat discussing his latest novel, One Indian Girl, about the impact of societal expectations on women in India, are also featured in the early release.

The Early Bird Discount offer ends 24 November 2017. For the full list of First 25 sessions, and the complete line up of 2018 authors, visit: emirateslitfest.com

The Festival is held in partnership with Emirates Airline and the Dubai Culture & Arts Authority (Dubai Culture), the Emirate’s dedicated entity for culture, arts and heritage, and the author list was presented during the launch event at the home of the Festival, the InterContinental Hotel, Dubai Festival City.

Speaking at the event, Isobel Abulhoul, OBE, CEO and Trustee of the Emirates Literature Foundation and Director of the Emirates Airline Festival of Literature, said: ‘When we started 10 years ago, none of us could have foreseen the enormous positive impact the Festival has had on the literary scene in the region. Thanks to our patron His Highness Sheikh Mohammed Bin Rashid Al Maktoum, the Vice-President and Prime Minister of the UAE and Ruler of Dubai, the Festival has been able to blaze a trail and become a Festival of international standing, attracting authors from across the globe. In our first year 65 authors attended. Since 2009 more than 1000 bestselling authors have visited Dubai, helping to share our passion for reading, opening the door to other worlds and building an appreciation of different genres, viewpoints and cultures. More than 20,000 students benefit through our Education Programme each year; the Festival has helped   launch the international publishing careers of eight locally-based debut authors, and has received numerous awards.

‘All this could not have happened without our partners, supporters and sponsors, most notably Emirates Airline, our title sponsor, who have helped make all this possible.’

More tickets for this diverse and entertaining programme go on sale in January. These include many award-winning authors from both the Western and the Arab World such as Carlos Ruiz Zafón, Spanish author of the international phenomenon The Shadow of the Wind; Iraqi author Muhsin Al-Ramli (The President’s Gardens); Man Booker 2017 nominated authors Kamila Shamsie (Home Fire) and Fiona Mozley (Elmet); and Ahmed Saadawi, author of the IPAF winner, Frankenstein in Baghdad, which will be published in English for the first time in 2018.

Real-life storytellers include Jane Hawking, whose autobiography Travelling to Infinity: My Life with Stephen chronicles her life with renowned physicist Stephen Hawking, Chief Business Officer at Google’s [X] Mo Gawdat who will inspire audiences with his story of engineering a path to joy through his book Solve for Happy; and Andrew Morton, the writer of the definitive biographies of Princess Diana, Angelina Jolie, and many others.

Sheikh Majid al Mualla, Divisional Senior Vice President Commercial Operations, Centre for Emirates Airline said: ‘We are excited to celebrate 10 years of the Emirates Airline Festival of Literature, an event that has become one of the world’s leading literary gatherings for its rich diversity of authors and engaging programmes that showcase the power of the written word. As an airline, we connect people with their passions and unique interests and through vibrant events such as this Festival, we are confident that audiences of every age will continue to have the opportunity to be inspired by the conversations, thoughts and ideas – however big or small – delivered during the event. We also believe that the Emirates Airline Festival of Literature contributes to Dubai’s thriving cultural landscape, and we look forward to supporting this event to scale even greater heights.’

Fun and frolic abounds in the children’s programme, which this year includes Festival favourite and author of The Grunts, Philip Ardagh; award-winning Kiran Millwood Hargrave with her smash-hit debut, The Girl of Ink and Stars; and King Flashypants himself, Andy Riley.

Legendary illustrators Tony Ross, Korky Paul, Guy Parker Rees and Jon Klassen will be bringing a range of hilarious characters to life, from The Little Princess and Winnie the Witch, to dancing giraffes and sneaky shapes

A special guest this year is the much loved presenter Baroness Floella Benjamin, who has entertained generations of youngsters with her TV programmes and books. In addition the Festival is thrilled to welcome, by video link, The Tiger Who Came to Tea writer Judith Kerr, celebrating 50 years since the publication of this classic story

Those who are ‘wild about animals’ can enjoy listening to ecologist Tom Moorhouse, the critically acclaimed MG Leonard, with her Beetle Boy stories, Holly Webb, author of the Animal Stories series, and animal trainer Julie Tottman, revealing secrets from the Harry Potter film set.

Gritty drama, intrigue and a dash of peril are always a big draw at the Festival and this year will be no exception, with crime writers Mark Billingham, discussing his standalone novel Die of Shame and providing an update on Detective Inspector Tom Thorne’s exploits; the Queen of Icelandic crime fiction, Yrsa Sigurðardóttir; and Peter James, with the latest instalment in the Roy Grace series.

The Festival is proud to highlight the work of home-grown talents in the UAE and many locally-based authors and Emirati writers are featured in the line-up for 2018. Zaid Adham and Yasser Alireza, creators of the Wayl comic book series, will be attending for the first time.

Montegrappa Writing Prize 2016 winner and runner-up Karen Osman and Jessica Jarlvi will be introducing their latest novels. Master Emirati storyteller Dr AbdullAziz AlMusallam and Noura Al Noman, one of the leading voices in reviving Arabic science-fiction and fantasy, return to discuss books and Arabic writing, while children’s authors Maitha Al Khayat and Sahar Naja Mahfouz will entertain with tales from their latest works.

Saeed Al Nabouda, Acting Director General of Dubai Culture & Arts Authority, commented: ‘We at Dubai Culture are proud to support the Emirates Festival of Literature, which celebrates its 10th successful edition in March 2018. We are pleased to be working with Emirates Literature Foundation, the organiser of the Festival, to contribute to building a culture of reading across all segments of the community, especially by offering young people a unique opportunity to meet some of the world’s most famous writers. We also value the role the Festival plays in encouraging the community to think creatively, helping them to better understand the cultures of the world, positioning the UAE as an icon for tolerance and openness in the region, and promoting cultural exchange, harmony and peace among different nations.’

Al Nabouda added: ‘Dubai Culture is committed to supporting the UAE’s literature sector and platforms such as this Festival to achieve the objectives of the National Strategy for Reading 2016-2026. We recently demonstrated this commitment by establishing a new Literature Department in the Authority, which will help us to strengthen Dubai’s position as a leading destination for regional and global cultural exchange by supporting culture, and enhancing the value of literature in the UAE and the region through our ongoing cultural programmes and initiatives.’

Education is at the heart of the Festival and the Education Days, Student Sessions, School Visits and Children’s Competitions last year reached 25,000 students across the country. Returning this year is the Poetry Live – GCSE Poetry Day, an amazing opportunity for students studying GCSE English to hear some of the most acclaimed British poets of today read live. Additionally, a dedicated ‘University Day’ will feature famous Arab World authors Muhsin Al-Ramli and Saudi Arabian historian Hatoon Ajwad Al Fassi engaging with university students on a number of topics.

There will also be a series of sessions and masterclasses focusing on the publishing industry in the Gulf, featuring acclaimed global and regional publishers, translators and writers who will examine opportunities for publishing in the Arab world and internationally.

A highlight of every Festival is the announcement of the winner of the Montegrappa Writing Prize for adults. The Prize has already seen eight previous winners and runners-up receive international book deals and become published authors. The competition is now open for first-time novelists to submit their entries.

The Emirates Airline Festival of Literature is held under the patronage of His Highness Sheikh Mohammed Bin Rashid Al Maktoum, Vice-President and Prime Minister of the United Arab Emirates and Ruler of Dubai.