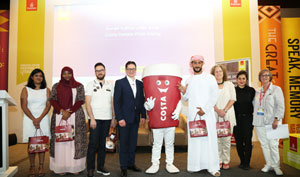 Dubai, 3 March 2018: The wait is finally over as the winners of the third annual Costa Debate were awarded at the Emirates Airline Festival of Literature. Participants of the competition were challenged to write a 300 word argument on which format they preferred reading most, E-book or Book. This year, the number of submissions for the competition have tripled since the 2017 edition. The topic continues to prove dynamic and active, as the two first prize winners of the Costa Debate chose opposite sides of the E-book vs Book debate.

The winners from each language category – Arabic and English – received an AED 10,000 dnata Travel Voucher and a year’s free coffee. Six runners up also won a month’s supply of free coffee.

The prizes were presented by food writer and multi-award-winning author of numerous Middle Eastern cookbooks, Claudia Roden,historian Ghaya Khalfan Al Dhahiri, whose book Voice of Al-Rashad, illustrates the important role of coffee in the history and culture of the UAE and Costa Coffee’s ‘master of coffee’ Gennaro Pellicia, the man with the £10 million tongue, who is responsible for tasting all the coffee that comes to Costa’s roastery in London.

Also in attendance was Shemaine Jones, Head Marketing Manager, who said, ‘This is the best result we could have imagined for this year’s debate, especially as we celebrate the 10th Emirates Airline Festival of Literature. We are delighted to have brought back the Costa Debate and to see the enthusiastic response to the competition, which has seen an increase in engagement and submissions every year. We wish the winners and runners-up all the best as they enjoy plenty of free coffee with all the books they will surely be taking home with them, in whichever format, from the Festival.’

The Costa Debate will return again in 2019 with a brand new debate.