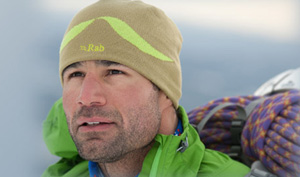 Dubai, 28 September, 2015: Meet the man behind an incredible story of redemption and astonishing endurance at the Dubai International Writers’ Centre. As part of the Emirates Literature Foundation’s continued efforts to foster cultural and literary exchanges in the region, the Centre will hold a talk on October 17, at 8pm with former rugby player-turned adventurer, Richard Parks, showcasing his incredible comeback tale, set against the backdrop of some of the most unyielding locations on Earth.

Parks recently attended the Emirates Airline Festival of Literature to great acclaim where he discussed how his successful rugby career for Wales was cut short by a devastating shoulder injury at the age of 31. He then took his life in a new direction and became a record-breaking extreme environment athlete.

Dubai International Writers’ Centre Director, Ranya Doleh, said, ‘We are particularly excited to have Richard Parks at the Writers’ Centre. His first critically-acclaimed and award-winning book Beyond the Horizon was showcased at the Emirates Airline Festival of Literature, our sister organisation, earlier this year, and was an instant hit at the Festival. We are thrilled that he will be returning to Dubai to share further insight into his remarkable story.

‘One of the aims of the Writers’ Centre has been to bring together regional audiences with global writers and speakers. We hope that the stories and experiences that we introduce to the public motivate and inspire them to delve into the world of literature, be it through reading or writing.’

Parks created the 737 Challenge, one of the toughest expeditions to undertake where he climbed the seven highest peaks in the three continents in just seven months, despite having never climbed a mountain before. He also became the fastest Briton in history to ski solo and unsupported from the coast of Antarctica to the South Pole and is now recognised as one of the world’s leading extreme environment athletes.

His talk will focus on his experiences and his achievements. This will be followed by a question and answer session and a book signing by the man himself. Book your tickets today at www.elfdubai.org/en/events/event/richard-parks-my-journey