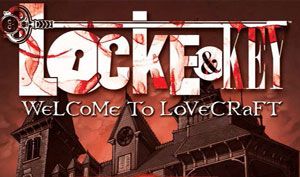 Dubai, 30 January 2018: The Emirates Airline Festival of Literature, the Arab World’s largest celebration of the written and spoken word, and Middle East Film and Comic Con (MEFCC), the region’s largest pop culture and entertainment festival, today announced their first collaboration to promote a love of reading to new audiences in the country. These two powerhouse cultural events in the UAE are combining forces to present more diverse forms of storytelling within their line-ups.

Under the spotlight as the first collaborative event is the Eisner Award-winning Locke and Key comic series by Joe Hill, bestselling horror writer and son of horror legend Stephen King and illustrator Gabriel Rodriguez. The series, about a grieving family pitted against the forces of evil, has sold more than a million copies and is already considered a modern comics classic. For the first time in Dubai, the creators of the comics will appear together on stage to discuss the series and upcoming TV adaptation, and the wider work of their creative partnership. The session will be held at the 10th Emirates Airline Festival of Literature, at InterContinental Dubai Festival City, on 2 March, 2018.

‘Comic books and graphic novels are becoming an intrinsic part of modern literature,’ said Isobel Abulhoul, OBE, CEO and Trustee of the Emirates Literature Foundation and Director of the Emirates Airline Festival of Literature. ‘They are accessible to all and their evolution into a recognised art-form has seen a rise in the quality and diversity of the content. At the Emirates Airline Festival of Literature, we celebrate the written word in all its forms, and comic books have always been a part of that. We are pleased to partner with MEFCC to continue to support this burgeoning industry, not only worldwide by recognising and inviting international authors for our events, but especially in the UAE, which has demonstrated an unending enthusiasm for all forms of literature.’

Suzy Pallett, Group Director of Consumer Shows at Informa Exhibitions, organisers of MEFCC said: ‘We are excited to partner with the Emirates Airline Festival of Literature and celebrate the breadth of storytelling available to readers today. The Locke & Key series is an integral part of modern pop culture, and hearing from the creators themselves will be an incredible experience for fans of the series as well as a wonderful discovery for the uninitiated.’

The 2018 Emirates Airline Festival of Literature will be held from 1-10 March, 2018. Pop culture enthusiasts can look forward to sessions by Nnedi Okorafor, a rising star in the world of fantasy and science-fiction, who has contributed to a Star Wars anthology, written a new Black Panther comic and is working on a comic series about the legend of African-Arab historical character Antar the Black Knight. Other comic book sessions include talks by Dubai-based comic writers of Wayl, Zaid Adham and Yasser Alireza and workshops and masterclasses for all ages. Additionally, live video stream discussions by The Martian author Andy Weir on his bestselling book and the blockbuster film adaptation, directed by Ridley Scott and starring Matt Damon, and children’s author Eoin Colfer on his Artemis Fowl series and young adult novel on Iron Man will take place at the Festival of the first time. Plus, The Maze Runner author James Dashner will discuss his young adult phenomenon and the film adaptations of his series, while the writer of the Tomb Raider game reboot, Rhianna Pratchett will delve into video game storytelling, the future of gaming and carrying on the science-fiction legacy of her father, Terry Pratchett.