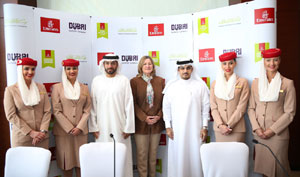 Dubai, 19 February, 2018: The Emirates Airline Festival of Literature, one of the Arab World’s most beloved literary events, will be commemorating its 10th anniversary with the publication of a limited-edition book. Organisers today announced that For the Love of Words, published by Dubai-based Motivate Publishing, will be launched at the opening ceremony of the upcoming Festival, to be held from 1-10 March, 2018. 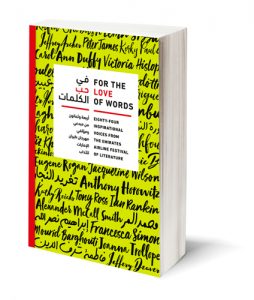 At the pre-Festival press conference, Isobel Abulhoul, OBE, CEO and Trustee of the Emirates Literature Foundation and Director of the Emirates Airline Festival of Literature said, ‘The Festival has grown from strength to strength with each passing year and everyone involved – authors, visitors, sponsors, students, team members and volunteers – have taken away the most delightful memories. To capture the spirit of our journey over that time what better way than with a book that any book lover would treasure?’

For the Love of Words features eighty-four inspirational voices – authors, speakers, illustrators and poets – that have been a part of the Emirates Airline Festival of Literature over the years. The anthology is a collection of articles, poems, short stories and illustrations that celebrates the love of words.

For the Love of Words will be available at the Festival venue, InterContinental, Dubai Festival City and in bookstores across the UAE.

An integral part of the Festival every year is the Education outreach programme to schools and universities across the UAE. This year has been a triumphant success for the programme with a 15% increase in the number of entries received for the children’s competitions – Taaleem Award for poetry writing, the Oxford University Press Story Writing Competition, Chevron Readers’ Cup and Emirates NBD Poetry for All Competition for poetry performance. With more than 25,000 students taking part in the Festival last year, an even greater number is expected in 2018 to have the opportunity to meet and hear an inspirational author either at the Festival or at their schools and universities.

New to the Festival this year is the International Students Programme, in association with the Department of Tourism and Commerce Marketing (DTCM), which aims to provide an exciting, diverse and inspiring three-day programme for university students from the Arab World. The programme plays a key role in the Festival’s objective to implement a cross-cultural exchange of ideas and spread knowledge through entertaining and informative sessions. The Programme is open to all graduate and undergraduate students in the Arab World studying at universities outside the UAE.

Sheikh Majid Al Mualla, Emirates’ Divisional Senior Vice President Commercial Operations, Centre, said: ‘Emirates is proud to support the 10th edition of the Emirates Airline Festival of Literature. The diversity of authors at the festival this year reflects the extensive global network that Emirates serves. Through this event we are connecting the people of Dubai with writers from all over the globe, whose work cuts across all ages, cultures, genres and topics. We’re proud to support this event and help an even larger audience get in touch with literary works and ideas. This is important for Dubai’s cultural landscape, and we look forward to supporting the Festival’s future development.’ 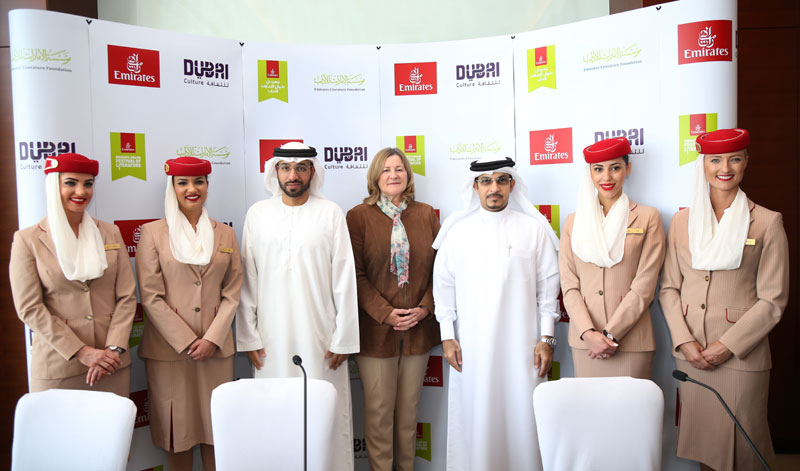 Author Debuts at the Festival

Some new additions to the Festival’s anniversary edition line-up include several first-time guests to the Festival, such as Gennaro Pellicia, Costa Coffee’s ‘master of coffee’ whose tongue is insured for £10 million; he is responsible for tasting all the coffee that comes to Costa’s roastery in London. Coffee connoisseurs can look forward to Gennaro joining the ‘But First, Coffee’ panel about the history of coffee and its importance in the world.

New at the Festival

This year’s landmark event features some of the biggest names in the world of poetry, taking the stage for a truly unique performance. For the Love of Words, presented by the Emirates Airline Festival of Literature, Dubai Opera, the Ministry of Tolerance and the British Council, with the support of the UK GREAT campaign, aims to explore the possibilities presented by cultural exchange between the two countries.

On 7 March, the Festival will be holding a Publishing Day, which includes a programme of sessions, masterclasses and workshops given by industry experts from around the globe on key aspects of publishing, challenges of publishing children’s books and the evolution of the Arab World publishing industry.

Pop culture enthusiasts have plenty to look forward to with sessions by Nnedi Okorafor, a rising star in the world of fantasy and science-fiction, writer of Black Panther: Long Live The King and part of the team bringing the legend of African-Arab historical character Antar the Black Knight to comics soon. Other comic book sessions include talks by Joe Hill, son of Stephen King and horror and comic book writer of the Eisner Award-winning comic series Locke & Key, Dubai-based comic writers of Wayl, Zaid Adham and Yasser Alireza and workshops and masterclasses for all ages. Additionally, live video stream discussions by The Martian author Andy Weir on his bestselling book and the blockbuster film adaptation, directed by Ridley Scott and starring Matt Damon, and children’s author Eoin Colfer on his Artemis Fowl series and young adult novel on Iron Man will take place at the Festival for the first time.

Saeed Al Nabouda, Acting Director General of Dubai Culture & Arts Authority, commented: “Dubai Culture’s vision is to establish Dubai as a global, creative and sustainable city for culture, heritage, arts and literature. The 10th anniversary of the Emirates Airline Festival of Literature also celebrates His Highness Sheikh Mohammed bin Rashid Al Maktoum, Vice President and Prime Minister of the UAE, and Ruler of Dubai’s vision in strengthening the UAE’s cultural presence, particularly in regards to the literature sector. Year on year, the Festival attracts leading authors from across the world, transforming Dubai into a global meeting point for top international literary talents while also inviting the public to immerse themselves in the joy of reading and opening their eyes to the cultures of the world in a spirit of tolerance, diversity and creativity.”

Al Nabouda added: “This fulfils our mandate to consolidate Dubai’s position as a leading destination for regional and global cultural exchange, and also supports the UAE’s National Strategy for Reading 2016-2026, which aims to spread a strong culture of reading across all segments of the society. By involving the entire community and giving people an opportunity to experience the magical world of the written word, the Festival also moves us closer toward achieving the Dubai Plan 2021 vision of a city of happy, creative and empowered people who proudly celebrate their cultural identities.”

Established in 2009, the Festival, held under the patronage of His Highness Sheikh Mohammad bin Rashid Al Maktoum, Vice-President and Prime Minister of the UAE and Ruler of Dubai and in partnership with Emirates Airline and the Dubai Culture & Arts Authority (Dubai Culture), the Emirates’ dedicated entity for culture, arts and heritage, has grown into the UAE’s premier literary festival. The 10th Emirates Airline Festival of Literature will be held from 1-10 March 2018.

The General Directorate of Residency and Foreigners Affairs in Dubai is the sponsor authorized to provide entry permits for international writers and facilitating their entry procedures through Dubai Airport.

Tickets can be purchased at the Festival website (tickets.emirateslitfest.com) or via the ELF Dubai app, available on the iOS and Google Play app stores and at Magrudy’s outlets around the UAE. Become a Foundation Friend loyalty member and enjoy benefits throughout the year, including priority booking and discounts on select Festival tickets, as well as exclusive discounts at several retail outlets in the UAE.