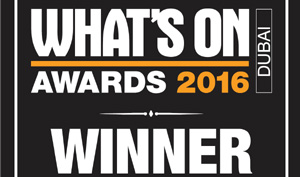 Dubai, 07 November, 2016: The Emirates Airline Festival of Literature was declared the Favourite Festival of Dubai at last night’s What’s On Awards 2016. This marks the event’s second accolade of the year, after winning Best Family Friendly Day Out at the Time Out Dubai Kids Awards 2016 in September. Yvette Judge, Chief Operating Officer of the Emirates Literature Foundation, accepted the Award. 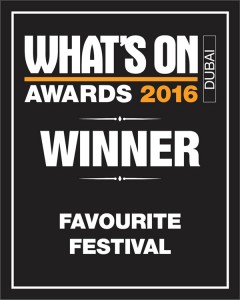 ‘What makes this award so special is that it was voted for by the public!’ Isobel Abulhoul, OBE, CEO and Trustee of the Emirates Literature Foundation and Director of the Emirates Airline Festival of Literature said. ‘And where would we be without the support of all the avid readers, the parents, children, teachers, librarians and more, who regularly attend the Festival and benefit from the diverse range of authors, speakers and sessions on display? Our aim, every year, is to make our event the best Festival for all ages and interests and one that book lovers as well as non-readers can enjoy. We certainly feel like we achieved that with the 2016 Festival, and look forward to achieving more of the same next year with our stellar line-up of authors. The key words for us are celebration and fun.’

Established in 2009, the Festival, held under the patronage of His Highness Sheikh Mohammad bin Rashid Al Maktoum, Vice-President and Prime Minister of the UAE and Ruler of Dubai, has grown into the UAE’s premier literary festival.

Running parallel to the main programme, the Festival’s popular competitions, Education Days and Fringe events will take place during the nine days of the event.