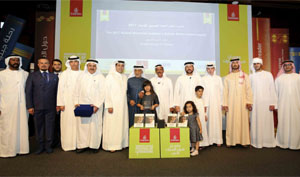 Dubai, 4 March, 2017: The fourth Khalaf Ahmad Al Habtoor Lifetime Achievement Award was conferred on His Excellency Dr Mana Saeed Al Otaiba at a star-studded ceremony during the Emirates Airline Festival of Literature 2017. The ceremony was hosted by Sami Al Reyami, Editor in Chief of Emarat Al Youm and His Excellency Dr Al Otaiba accepted his award accompanied by his son and daughters. The annual award, this year held during the UAE’s 2017 Month of Reading, recognises noted figures from the UAE who have influenced the long-term enrichment of literature in the country.

His Excellency Dr Mana Saeed Al Otaiba has extensive experience in a number of fields, having served as President of the Organization of the Petroleum Exporting Countries (OPEC) a record six times, between 1971 and 1983, as well being Minister of Petroleum and Mineral Resources of the UAE under President Sheikh Zayed bin Sultan Al Nahyan before becoming Advisor to both President Sheikh Zayed and later Sheikh Khalifa bin Zayed Al Nahyan.

At the ceremony Khalaf Ahmad Al Habtoor, said, “It is with great pleasure that I bestow this award on Dr Al Otaiba. His exemplary career in the world of business, economics and politics warrants recognition in itself, but today we commend and recognise him for his literary efforts. His body of published work has become an indelible part of Arabic, and especially Emirati, literature and it is a legacy that the UAE will always benefit from.”

Isobel Abulhoul, OBE, CEO and Trustee of the Emirates Literature Foundation and Director of the Emirates Airline Festival of Literature, who was also in attendance, said, ‘We are honoured to be awarding Dr Al Otaiba for his great achievements. He has effortlessly increased the profile of the literary scene here in the UAE through his poetry and books. There couldn’t be a more perfect recipient for this award in the UAE’s 2017 Month of Reading.’

Dr Al Otaiba’s literary work has been renowned for decades. He was a prolific poet, writing 42 books of poetry, in colloquial Arabic, formal Arabic, and English, along with novels and non-fiction books about the Petroleum Industry. The story of his novel Karima was later adapted for television as well. His stature in the literary world has seen him receive many accolades, including honorary doctorates from universities around the globe.

Established in 2014, the Khalaf Ahmad Al Habtoor Lifetime Achievement Award is presented annually to recognise individual contributions to UAE literature. The inaugural awardee was Dr Rafia Ghubash, Professor of Psychology, Founder of the Women’s Museum and Trustee of the Emirates Literature Foundation. In 2015, noted Emirati businessman, philanthropist and one of the first published writers of Dubai, Abdul Ghaffar Hussain, received the award and in 2016 renowned Emirati poet, diplomat and UAE businessman Mohammed Bin Hadher was posthumously felicitated.

The Festival continues until 11 March with more sessions, panels and workshops for all age groups.