Love Letters to the UAE 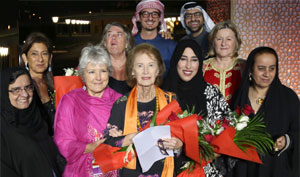 Dubai, 8 March, 2017: The official Emirates Airline Festival of Literature Welcome Ceremony took place at the recently launched Etihad Museum. The special event Love Letters to the UAE welcomed the majority of the 184 attending authors at this historic venue who then had the chance to tour the museum. Everyone was able to savour Emirati cuisine at dinner and also listen to both Emiratis and expatriates share a personal memory or anecdote in the form of a ‘letter’. The evening was sponsored by the Festival’s partner Dubai Culture & Arts Authority (Dubai Culture), the Emirate’s dedicated Authority for heritage, arts, and culture, and the dinner was sponsored by Seven Sands Restaurant, who specialise in gourmet Emirati cuisine.

In celebration of the UK/UAE 2017 Year of Creative Collaboration, the evening concluded with key speakers sharing a brief commentary on their personal experiences of living in the UAE. Reciting their ‘letters’ were Sultan Al Qassemi, Emirati columnist and social media commentator, Ali Mostafa, Emirati filmmaker, director and producer of City of Life, Fatma Al Marri, CEO of the Dubai Schools Agency which is part of the KHDA, Alison Collins, Founder of the Majlis Gallery in the Al Fahidi Historic Neighbourhood, children’s author Julia Johnson, Lady Audrey Flanagan, a longtime resident of Dubai and wife of the late Sir Maurice Flanagan, who until his retirement, was the Executive Vice Chairman of Emirates Airline and Dr Rafia Ghubash, President of the Arab Network for Women in Science and Technology and as Founder of The Women’s Museum. The evening was hosted by Shahnaz Pakravan, long-time Festival supporter.

‘The Etihad Museum was the ideal setting for such a wonderful celebration,’ said Isobel Abulhoul, OBE, CEO and Trustee of the Emirates Literature Foundation and Director of the Emirates Airline Festival of Literature. ‘Our Festival theme this year is ‘Journeys’ and we really wanted to interpret it in as many ways as possible and what better than the story of the Journey of the UAE at this exquisite venue. The Dubai skyline created the perfect backdrop for international and regional authors to mingle and exchange ideas – East met West and made this evening enchanting. All of us have learnt a little more about the UAE’s history today and we look forward to continuing our reading and learning journey during the course of the Festival this week.’

The evening also saw Dr Hessa Abdullah Lootah receive the Emirates Airline Festival of Literature 2017 Festival Personality Award. The award is awarded annually ‘in recognition of a major contribution towards fostering literacy, education and love of literature in all its forms’. Dr Lootah was educated in the UAE, Egypt and the USA, receiving a scholarship from the Ministry of Education to study cinema. She was the UAE’s first female TV director and founder of the first Women’s Association in Dubai.

After working as a director at Dubai TV she returned to the United States to pursue her graduate studies at Ohio University, obtaining an MA in Media and Development and a PhD in Mass Communication in the field of Gender Studies and Cinema. Her PhD proved to be a turning point, both in introducing her to Western theories (which she used as a departure point in pursuing her own research) and in allowing her to interact with prominent intellectuals.

She later took on various prominent roles in the UAE, including Head of the Department of Mass Communication at UAE University, a member of the National Media Council, and author of a number of important studies on technology and media. She was one of the recipients of the UAE Pioneer Awards in 2015.

The Festival, which has already achieved a successful first weekend of events, continues from 8-11 March with more sessions, panels and workshops for all age groups.