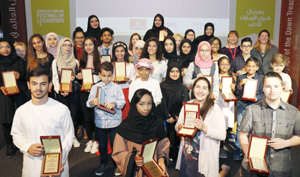 Dubai, 4 March, 2017: A new generation of writers took their first steps on their writing journeys today at the Emirates Airline Festival of Literature. The winning short story entries for the Oxford University Press Story Writing Competition 2017 were announced and winners received trophies and a commemorative dual-language book containing the winning stories.

The Festival, which will continue until 11 March, is one of the first international literary events in the UAE’s Month of Reading.

Presenting the awards at the ceremony were Festival favourites Lebanese children’s author Sahar Naja Mahfouz and previous winner of the Montegrappa Writing Prize and author of the Unicorn in New York series, Rachel Hamilton.

The theme for the competition this year was ‘Journeys’, which was explored by the contestants through their stories in both Arabic and English. This year, more than 2200 submissions were received, making 2017 the competition’s most successful edition. Competition judges this year included Festival authors Maitha Al Khayat and April Hardy.

‘The competition is a wonderful challenge,’ Julie Till, Head of Business Development, Central Asia, Middle East & North Africa, Oxford University Press, ‘that showcases the extraordinary talents on display. Each year the creativity of the stories surpasses the years prior. With imaginations like this, you can tell that these young people have incredible futures ahead. Oxford University Press appreciates the opportunity to work together with the Emirates Airline Festival of Literature to propel the literary interests of the students of the UAE. We hope the winners and all the participants continue writing.’

The Festival continues till 11 March with more sessions, panels and workshops for all age groups.