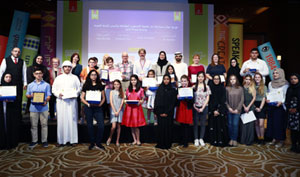 Dubai, 10 March 2018: The winners of the Oxford University Press Story Writing Competition were honoured at the 10th Emirates Airline Festival of Literature with printed books containing their original short stories and winner plaques. The annual competition has grown immeasurably since its inception in 2009, with almost 3000 students from around the GCC sending in their entries this year.

The competition runs in Arabic and in English and is divided into age-specific categories: 11 and under, 12-14, 15-17 and 18-25. Presenting the awards at the ceremony this year were Festival 2018 authors Ali Sparkes (Thunderstruck), the writer-illustrator duo behind the Oxford Reading Tree books starring Biff, Chip and Kipper, Roderick Hunt and Alex Brychta, and Emirati children’s author Eman Al Yousuf.

In celebration of the Festival’s milestone anniversary, the theme for this year’s competition was ‘Memories’. ‘The stories submitted by the students reflected a range of topics exploring this theme,’ said Julie Till, Head of Central Asia, Middle East & North Africa at Oxford University Press. ‘The competition entries are always such a revelation into the minds of these young children – they are so aware of the world around them and have such staggering imaginations, the judges are continually amazed by their work. Great things lie ahead for not only the winners, but the other contestants as well. You have already started your journey to becoming a writer, so keep going and never stop.’