School Librarian of the Year Award 2018 Now Open for Nominations 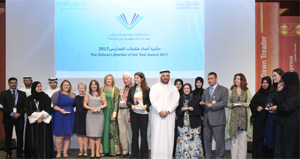 Dubai, 1 October, 2017: Nominations are now open for the second edition of the School Librarian of the Year award, which was introduced last year by the Emirates Literature Foundation and The Executive Council of Dubai. After a successful inaugural year which saw 100 nominations submitted from around the country, the Award returns to commend and applaud the work of the UAE’s school librarians in encouraging children to read for pleasure.

Nominations for outstanding librarians at public and private schools in the UAE are welcome from all in the community, including colleagues, head teachers, students, governors and parents. Self-nominations are also encouraged.

First place winners from a public school and a private school will each receive a trip to the Warner Bros. Studio Tour London – The Making of Harry Potter, flights and accommodation for four people, plus a visit to the British library.

The winners of the Award will be honoured at a ceremony held during the 10th Emirates Airline Festival of Literature, the Foundation’s landmark event, from 1-10 March, 2018. All nominees will be invited to the Award Ceremony, an afternoon tea and a panel discussion.

Reading is a Social Value

Commenting on the occasion of the Award’s launch, His Excellency Abdulla Abdul Rahman Al Shaibani, Secretary General of the Executive Council of Dubai said: ‘Creating a culture of reading for students is a social value that we look forward to enhancing in all sectors of society. We believe that there is no better place to start than in schools and their libraries. We were encouraged by the positive response to the first edition of the competition as reflected by the students and the librarians who participated in the award.’

He added, ‘Knowledge development is an integral part of all the initiatives launched by His Highness Sheikh Mohammed Bin Rashid Al Maktoum, The Vice-President and Prime Minister of the UAE and Ruler of Dubai. Above all is his clear ordinance on the improvement of education. We have learned from international experience that school librarians play an integral role in bettering the educational process by developing students’ cognitive output and putting them on the path of self-learning; hence we are determined to support them.’

The School Library is Where the Passion for Reading Begins

‘Most of our reading journeys begin in school libraries,’ said Isobel Abulhoul, OBE, CEO and Trustee of the Emirates Literature Foundation and Director of the Emirates Airline Festival of Literature, ‘and it is important to encourage librarians to continue being key instruments in helping children adopt reading as a hobby. And it is vital that school librarians, often unsung heroes, receive official recognition and encouragement in their daily endeavours to encourage students to read, especially to read for pleasure.

‘The joy and excitement of the previous Award is still fresh in my mind and, thanks to the support of The Executive Council of Dubai, we are able to reward the UAE’s best school librarians again. We look forward to the nominations and seeing the incredible work of the country’s librarians.’

The closing date for nominations is 14 December, 2017. For more information and to enter the competition, visit elfdubai.org/en/librarian-award-new