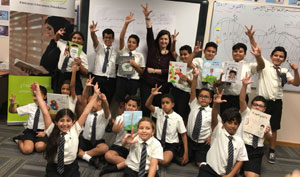 Dubai, 25 October, 2017: The Emirates Literature Foundation, in association with the Knowledge and Human Development Authority (KHDA), conducted the fifth annual Arabic Language Week from 18-24 October. The week-long celebration of the heritage and significance of the Arabic language was held in various educational institutions across the UAE.

Eman Al Hammadi, Competitions Manager and Arabic Education Relationship Officer at the Emirates Literature Foundation, who organises the Week, said: ‘The goal of the Arabic Language Week is to make learning Arabic fun and innovative. We take students outside their classroom environment for them to appreciate the beauty of the language. It is an important step in the Foundation’s continuing efforts to align with the UAE government’s campaign to raise awareness about the importance of the Arabic language and continuing the rich legacy of Emirati culture.’

Alongside the school and university visits by the authors, the Emirates Literature Foundation also hosted an Arabic Language Week session for children with determination. This session covered a diverse range of simple activities that encouraged students to be more expressive when communicating.

Fatma Al Marri, CEO – KHDA said, ‘We are proud to have played a part in this success story and our partnership reflects the continued support to inspire a love for the Arabic language. Young people in the region are keen to know more about their heritage and by learning their own language, we hope they will be inspired to understand the Arab culture and values better. This year has been exceptional and we have seen an impressive increase in audience participation during the Arabic Language Week over the past editions. We look forward to greater collaboration and supporting the upcoming events.’

The Arabic Language Week is part of a number of Foundation initiatives that also include its flagship event the Emirates Airline Festival of Literature, the UAE’s premier literary festival. The Festival will be holding its 10th anniversary next year, from 1-10 March 2018 and officially launched the anticipated news of its author line-up this week.